Biking from Osaka to Nagoya, Day 2

Waking up at my hotel in Otsu, I knew that I was just a couple of city blocks from Lake Biwa.  I was dying to see the lake for the first time and after my mentally and physically grinding on day 1, I really hoped it would be an easy day.

I arrived in the hotel’s lobby for the breakfast that was included in the room price.  I didn’t have high hopes as the traditional Japanese breakfast doesn’t have much that I care to eat.  I really just wanted some toast and maybe a cup of coffee.  Optimistically I’d add yogurt and a well done egg, but I really didn’t expect these.

At 07:00, I expected to have the place to myself.  A quiet snack before hitting the road.  To my surprise, the little cafe was completely packed.  Wall to wall with not a seat to be had.  I then looked at the “food”.  Not a single thing leaped up and said “I’m yummy.  Eat me!”  I turned around and headed back to my room.

My panniers were already packed.  In 5 minutes I was checked out of the hotel and biking downhill to the road that would take me all the way to Takashima.  Finding that road was easy enough.  It was the only large road.

Pre-trip research had told me that there were many bike paths or smaller streets between the main road and the water.  None of these looked longer than a few kilometers long, so I didn’t take much care into noting where there were.  I figured if they were easy to find and I didn’t mind the detour I’d take them.  If I was tired or needed to make up time, I’d stick to the busier road.

Near the edge of Otsu, I stopped for the first time.  Not because I needed a rest.  I just found a very nice spot to take photos.  I didn’t even notice the temple until I stopped to park my bike (also included in the photos, with all my bags still attached.)  I was focused on the beautiful lake! 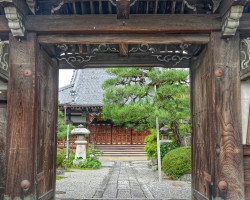 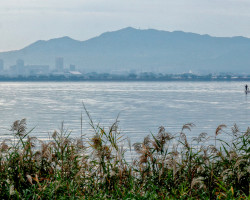 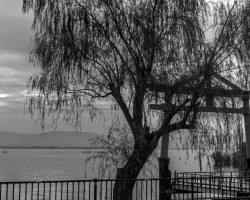 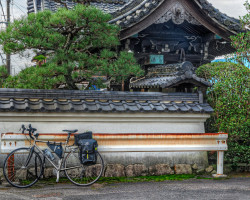 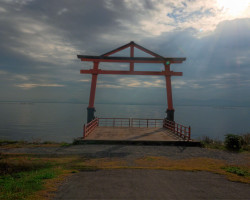 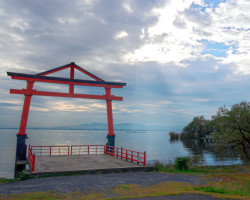 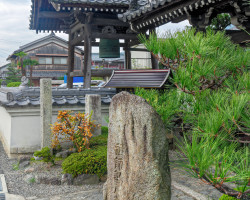 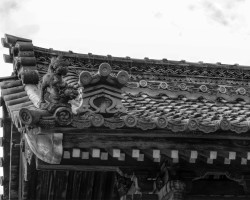 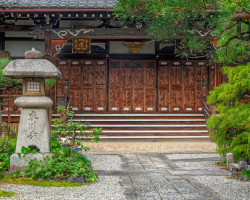 As I was about to continue my ride, a group of cyclists passed me by.  About 10 guys all geared up for a fast ride.  None of them even looked in my direction.  As I pulled back out onto the road, I looked up and saw that they were all stopped at a red light just ahead.  I pulled behind the last rider and said “oh-hi-oo” (Good morning in Japanese.)  The last guy turned around and gave me a really annoyed look.  Like I was dirt on his shoe or something.

The light turned green and the riders took off.  I felt the need to show these boys that I could ride.  They were moving quick, but not at a race-pace.  I was able to keep up, at the back of the pack.  10 minutes later, another red light halted the pack.  I said again to the guys “oh-hi-oo”.  This time several heads turned and the guy that snarled at me the first time spoke with the other guys and must have told them that I was keeping up with their pace.  A few of them nodded and gave wide-eyed looks at me.

On the green, I again kept pace with the guys.  I could tell they were riding faster than before.  I guess their inner pride told them to push harder and lose the “gaijin” (foreigner).  They had no hope of losing me.  They weren’t pros, just a group of guys out for a ride.  And I would have let my heart jump out of my chest, if it had meant keeping up with them, for the sake of MY pride.  Too bad those guys didn’t have the 20kg I had in my bags.

Another 5 minutes goes by and I’m in still holding my own.  The lead rider signals a left turn.  I intend to continue straight as I have no real turns on this entire day (yippee!)  As we approach the turn, I yell out “si-yo-nar-aaa! (Goodbye!)  At least half the pack turned around and waved goodbye to me, with HUGE smiles on their faces.  Obviously I made a good impression and made some friends today.

With the pressure of team riding now gone, I slowed my pace to a speed more conducive to long distance riding.  At the next opportunity, I pulled over to a drink vending machine to get some refreshment.  My water bottles were full, but I had yet to have my morning coffee!  As you can see by the address of this website, coffee’s pretty darned important to me.

If you haven’t been to Japan, you might be surprised to learn that the average vending machine serves cold and HOT drinks.  The hot drinks tend to get rotated out for iced drinks in the summer (much to my dismay) but the prices are VERY cheap and the machines are everywhere.  I don’t think you can take 100 steps in downtown Tokyo without finding a machine.  I love it!!

Stuffing a couple of small coffee cans in my pocket, I head down the next small street I see in the direction of the water, lake Biwa.  There are a few small houses between the main road and the water.  On my left I see several large gardens with some really delicious looking vegetables. 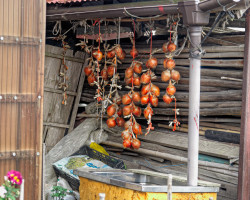 Not onions. Any idea what these are? 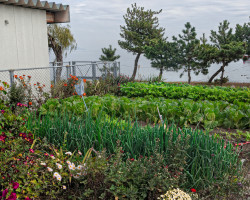 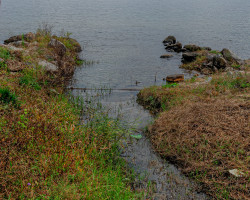 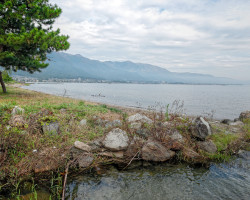 Watching me closely, two locals appeared, a man and a woman.  Walking down the little road, they seemed quite surprised that a gaijin had found their little homes.   The man approached me and asked ‘what country?”  I told him that I was from Canada.  His mouth fell open.  He hadn’t guessed that one.  He smiled and waved as he walked away.  I guess they don’t get many visitors.

Lunch on the road didn’t present many options.  The only place I found to stop was something resembling an American truck stop.  Gritty, dirty and smokey.  I ordered a rice with curry.  It’s about the only thing I know how to order in Japanese.  I’m lucky they had some!

The afternoon held a few surprises, like the incredible bike path under the tracks for the bullet train.  Probably the best path I’d see on the whole trip.  Perfectly paved with separate crossings at each stop.  The cars stop for YOU, not the other way around.  Awesome!  Too bad the route they picked was more like a snake’s track than a proper path.  3 steps forward, 2 steps back sort of thing.  Not a direct route to anywhere.

One of the stranger things I’d find on the trip I happened upon by complete accident.  I saw something out of the corner of my eye and decided to investigate.  What I found was a bicycle graveyard of sorts.  I guess this is where the old ones go to die.  Their parts are stripped and sorted for recycling here.  I’m not sure why it’s only bikes, but it makes for quite a sight.  In the lower right side of the photo you may be able to see the driver of a truck sitting in his cab.  He refused to come out while I was using the camera.  As soon as I put it away, he jumped out and began unloading a fresh batch of old bikes.  I wonder if these are unclaimed street bicycles from a larger town.  Many of the parts looked new.  I can’t imagine why you’d scrap a new bike otherwise. 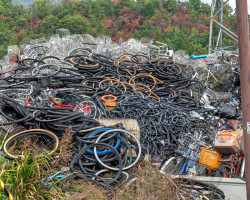 Lots of beautiful scenery on the rest of the ride.  A very easy day too as it was nearly flat.  Just following along the water.  Didn’t see a single tourist (non-Japanese anyway) the whole day.  I think I turned a few heads in the smaller villages too.  Lots of people did double-takes when they saw me.

About an hour before sunset I arrived at the “Grand Park Hotel“.  The hotel staff were a bit confused when I asked if I could take my bike into my room.

They were now a flurry of whispers and hushed comments to each other.  The manager asked to see my bike.  I took her outside and showed her.  She not only let me take it into my room, but she held the elevator door so that I didn’t have to carry it up the stairs!  Awesome…  My worries about it being stolen dropped to almost zero.  I instantly started to relax.

After a nice hot bath, I headed off for ‘town’.  But I’ll leave that for the next blog post.

Or go back to the start of this adventure: