My work in Nagoya concluded last week.  We’re off to Fukuoka for 8 weeks.  The easiest way to get there is by ‘bullet’ train.  A few weeks ago I looked at the route and realized that I’d be passing right through Hiroshima.  I’ve wanted to go there for a long time, so I thought it would be the perfect chance.  Take an early train out there, spend a few hours there and then continue on to Fukuoka.

Not really sure what to expect, I booked myself a “Green Car” ticket (wider seat and less crowded then the normal seats) since Cirque is paying for the normal cost of a ticket.  Instead of the normally crowded 3 x 3 seating arrangement, these seats are 2 x 2 and are rumoured to have a lot less people.  The extra $50 to be comfortable for a few hours sounded great to me. 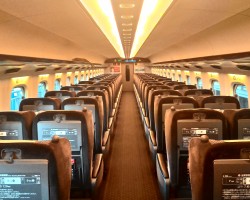 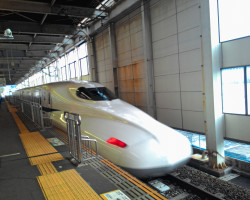 I lucked out.  As you can see in the photo, my car was nearly empty.  Lots of leg room and there’s even a drink service after every stop.  It’s an express train, so that’s really about once per hour.

The photo on the right was  tricky.  The trains accelerate so fast, that they’re nearly at top speed by the time they leave the station.  I was near the nose of this train when the alarms sounded, warning people to stay away while it moved past.  By the time the last of the 16 cars went by, the train was doing well over 100km/h and I lucky enough to get this shot on my camera phone.  You can see the motion blur.  I had to preset the shot and look over my shoulder to guess when the end of the train was coming.  I really didn’t expect it to work!

Arriving at Hiroshima Station, there are a number of options to get to the island where the museum and Atomic Dome (the correct name is Hiroshima Peace Memorial).  Bus, taxi, streetcar or by foot.  Taxis are of course the most expensive.  Busses may be direct, but the routes may not be easy to understand.  Most people take the streetcar.  The routes seem simple enough.  More confusing is the track layout at the terminus, which is the train station.  Multiple lines end here at the same platform.  You’ve got to be sure you’re on the right one.  I didn’t.  I was well off track, right from the start.  By the time I realized my mistake, I was 1/2 way across town headed in the wrong direction.

Jumping off the train, I decided that instead of getting annoyed by my current situation I’d use it to my advantage and see some sights the old fashioned way:  Exploring!  A quick look at a transit map told me I had pretty long walk ahead of me.  I noted the general direction and set off.

Less than 30 minutes later I was back on track.  Hiroshima is NOT a big town.  Walking from the main station would have seemed much more attractive an option if I’d known this at the start.  The maps are deceptive.

The island is home to a huge park, various memorials and a museum devoted to those that perished when the world’s first atomic bomb was detonated over the mostly civilian population of Hiroshima.

My words can’t really describe the sights of the museum, you’ve really got to go yourself.  I chose not to use my camera much inside of the museum.  While camera use without flash IS permitted, I thought it was a bit tasteless to go around clicking pictures.  I did take a few, but only when I was sure not to disturb other visitors.

I hope the World never again sees this level of horror. 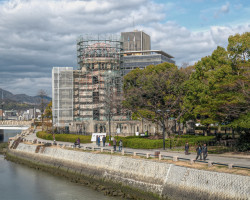 The scaffolding you see has been erected to perform an inspection of this UNESCO protected building. 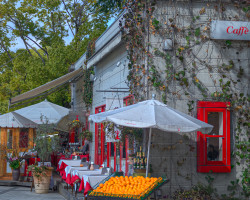 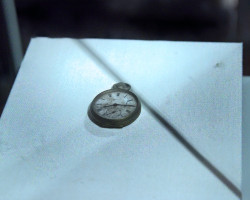 The owner and this watch stopped at the moment of the explosion. 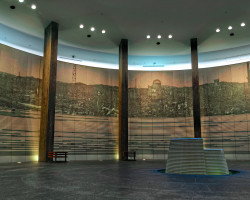 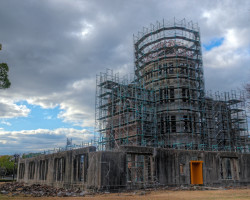 The bomb exploded about 150 meters behind where I’m standing to take this shot.