Shiogama Shrine, near the base of Mount Fuji

Several months ago when I found out that I’d be heading to Japan, I started doing some research to see what was in or a short distance from Tokyo.  I was quite surprised to find that Mount Fuji is actually quite close!  I’m told that on a clear day, it can even be seen from town.

Doing a quick Google search for Mount Fuji, in many of the photos I found is a beautiful pagoda, surrounded by cherry blossoms, with Mt. Fuji in the background.  I was amazed by the beauty of these photos.  But where was this Pagoda?  I could not find it’s name on any of the pictures (at least not in English.)  I gave up.

Several weeks later, while doing some research about doing a hike up to the top of the mountain, I found a picture of the same pagoda with the name of a temple in “Fujiyoshida”, a small town at the base of one of the main trails leading up to the top of the mountain.  Jackpot!  I quickly checked a map and found that the temple was within easy walking distance from the “Fujisan” train station.  I decided to go and check it out!

It only takes 2 trains from the Skinjuku (the world’s busiest train station).  If you plan it well, you can do the entire trip in less than 2 hours.  Be prepared for crowds though.  The first train leaves every hour and it’s FULL.  You’ll need a reservation ahead of time, which you can buy from a machine or attendant right on the platform.  I was able to get one for the very next train, but those that came later didn’t get one and had to wait another hour.  I think the machines will let you buy them well in advance, so if you’re passing through Shinjuku (as you often will if you’re exploring Tokyo), stop in and buy one a day or two early.

How to get there:

Take the ‘Chuo’ Line train.  Be SURE to get one of the express trains.  There are several different levels.  Local (all stations), Limited ( and Express. and you’ll pay a supplement to the normal fare.  It’s worth it!  The Express takes about 45 minutes.  The local can be 90 minutes or longer.  You can use your ‘Suica’ card to pay for this portion of the trip.

Transfer in OTSUKI.  A separate ticket must be purchased to take the line to Fujisan.  For this part of the trip, your ‘Suica’ card will NOT be accepted.  You may buy a ticket from the machine or at the ticket office as you change platforms.  No need to stress about this, just follow the crowds.  Everybody will be doing this.  You’ll have some options here too, including multi-trip passes.  Direct, Express and Local trains.  The prices vary a lot, so think about what you need before you buy. 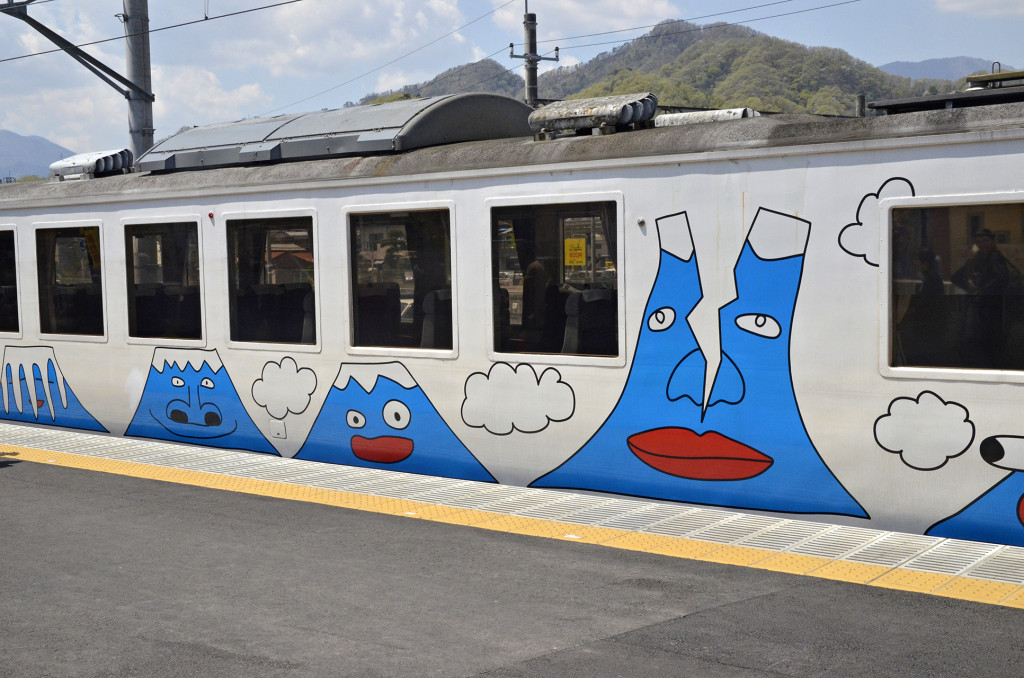 The Express train from Otsuki has a cute paint job.  On the day I went, this train was overflowing with tourists.  Standing room only and hardly room to breathe.  Even though I paid the extra money for an Express train, I ended up taking a local train just 15 minutes later.  It took a lot longer, but I nearly had the entire car to myself.

Arriving at the Fujisan station (the end of the line, you can’t miss it) I was disappointed to see that Mt. Fuji was covered by clouds.  But unlike Tokyo, the cherry blossoms were still on the trees.  A small victory!  Now I just had to find the pagoda.  I walked the kilometer and a half through Fujiyoshida, I arrived at the entrance to the Kitaguchihongufujisengen Shrine.  On the board outside the front gate, there was a large map with photos of the attractions of the surrounding area.  The pagoda was listed as #5 on the attractions list, I struggled to find it.  It took me several minutes to locate it.  Not where I thought it was at all!  About 4 kilometers away, on the complete other side of town, actually outside of town, up a hill.  Damn!

The weather was nice, so even though I could have taken a train a couple of stops to save some walking, I decided to ‘leg it’.  Walking completely through the town, I hoped to stop for lunch somewhere on the way.  No such luck.  Despite the huge amounts of tourists arriving in the town daily, I failed to find a single restaurant on the main street.

Arriving at the gates to the “Shiogama Shrine”, I expected to see the pagoda.  Instead I found an endless set of stairs heading UP.  Covered by the cherry blossoms, I soon found a large Torii (arch) over the walkway.  Confident that I was in the right place, I headed up.  Not many people here.  Not empty, but plenty of space.  A very empty and calm feeling came over me.

About 15 minutes of stair climbing later, I finally saw the pagoda.  Quite a bit smaller than I expected, about 10 meters high.  The blossoms were out in full bloom.  The weather was great and I had plenty of time to take pictures.  It only could have been better if Fuji had been visible.  It still took my breath away!  So BEAUTIFUL.

Mount Fuji is hiding behind this Torii

From the entrance, you see nothing.

After just a few steps, a Torri appears

Look closely and you’ll see that I’ve photoshop’d away that ugly ladder on the back of the Pagoda. Much nicer now….